As I described in an earlier post, we fried our original pair of RV – Marine deep cycle batteries by leaving them connected to shore power over the past six months.  Reason is that our power controller is ‘dumb’ in that in continuously pushes a 13.6V trickle charge into the batteries.  We’ll replace the unit with a ‘smart’ one that knows when the batteries are fully charged.

We’re dry camping with our new batteries and are learning the ropes.  With the sun low in the sky this time of year, our 160 watt solar panel was only able to push 70 Ahr of juice into the batteries.  But we probably used over 80 Ahr.  So this morning, the batteries were low at 11.1 volts.  This is not sustainable so we’ll have to cut our usage even more when we reach Santispac Beach for three nights of camping later this week.

Here’s our site at La Ventana with our 160 watt solar panel opened to the sky.

Remember those books ‘Europe on $10 per day’?  I never believed them.

Well living down here is pretty much like that.  Take the local restaurant. Bottle beers are $1.50 (30 pesos) and large margaritas are $2.50 (50 pesos).  When traveling, you’ve got to love the strength of the US dollar.

Yesterday’s drive up Hwy 1 was short but no easy feat.  We were told that there was a campsite on the beach near La Ventana but we couldn’t find it.  So I kept driving until we had passed through the neighboring city of El Sargento.  Then on the dirt road after the pavement ended.  Finally ran into a guy who said there was camping ahead, ‘just keep going’.

Well we found it.  About six derelict rigs spread out in no man’s land.  Not exactly what we were looking for.  So we turned back.

Met another guy who knew the campground and gave us directions.   Found the landmark building Playa Central and drove around to the beach.  Uh oh, it’s loose sand and I could tell I was losing traction.  A guy at the bar yelled ‘Stop!  Turnaround! Or you’ll get stuck!’

But was it too late?  I started to back out but only made it a few feet before getting stuck.  Forward a few and then back a few.  Kept rocking it just like growing up in the Minnesota snow and I slowly worked my way out.  Had I gone in further so that the Airstream’s wheels were in the loose stuff, I’d still be there.

So back we went and bingo, there’s the campground on the other side of Playa Central.  No hook-ups so manage your power and water.  But it’s $10 per night and the kite surfers love it.

Here’s a shot of the front row and these guys have been here since Sept.  First come, first served.

On the drive down Baja, we were always pointed south with the sun in our eyes. But no more. After two weeks in the beautiful Playa Norte RV Park, we packed up to start our 11 day trek back to San Diego.

We’ve really enjoyed our Baja stay and have developed a bit of the mañana attitude. But what’s not to like? Camping on the beach, beautiful weather and a spacious RV spot in the front row.

Here’s a parting shot of our campground with the beach right behind me.

On several occasions, I’ve seen the the rays jumping out of the water but haven’t had my camera with me.  So I was happy to get these shots, crappy though they are (rays too far out).

Scientists don’t really know why they jump although two common theories are that they are either trying to remove parasites from their skin or a form of a mating ritual. My money is on the latter because men will, you know, do just about anything to get lucky 🙂

Today’s wind was every bit as big as yesterday but there was a big difference.  The swells were larger and that meant that the kite boarders had an opportunity to catch some big air.  But only if you have a classic board 🙂

There were a few folks out there jumping the waves but the person who really ripped them up was this woman.  Kudos to her!

We’ve been camped on the East Cape of Baja in the beach town of Los Barriles.  Some say the East Cape hubs of Buena Vista and Los Barriles, magnificently situated on Bahia Las Palmas, are the Los Cabos of forty years ago.  I say that it’s a lovely place that I’ll greatly miss.

Los Barriles is about 900 miles south of the border town of Tecate, CA and just a few miles north of the Tropic of Cancer.  The tropic is the most northerly circle of latitude at which the Sun is directly overhead on the summer solstice.

The locals have constructed a monument on Hwy 1 at the location of the Tropic.  Here’s the plaque with an outline of the Baja peninsula and the Tropic.

Check out today’s white water and the difference from yesterday’s post.  No comparison.

The weather forecast was for winds of 21 mph but it sure felt like a lot more.  Just standing on the beach meant burning your legs from the sand bombardment.

And boy did the wind surfers and kite boarders show up.

First up are the kite boarders.

And the wind surfers.

And those riding foils.

And finally the ladies weren’t left out of the action. 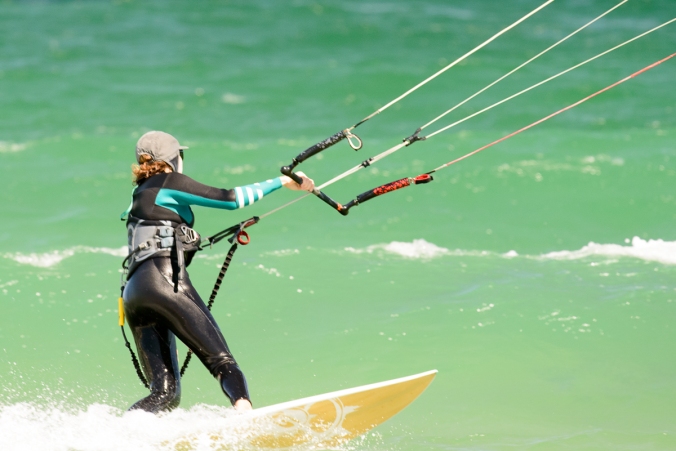