We arrived at the KOA in Moss Landing last night and what a great spot.  It’s right in the middle of Monterey Bay and about 100 yards from the beach.

My first order of business was to get a nice run in.  Google maps showed a trail along the dunes that looked enticing.  What it didn’t show was that it was soft loose sand.  Running was a chore but it sure felt great at the finish 🙂

Our campsite is also about 200 yards from the wonderful Phil’s Fish Market & Eatery.  Cioppino anyone?

Carol and I camped last night just outside of King City.  On Hwy 101.  Nice place with the wonderful Wildhorse Cafe next door.

This morning I went out for a run on Wildhorse Rd.  Picked it because it went up a hill and toward the vineyards.

Just as I was heading up the hill, three dogs came racing out of a decrepit property with all their teeth showing and barking like crazy.  And me?  I’m in the middle of the road minding my own business.

So I’m back peddling like crazy and there’re nipping at my feet.  If I had fallen, I have no doubt that they’d have chomped into my legs or arms or whatever flesh they could grab.

The 25 pounder on my right bit my shoe half a dozen times and finally hit my ankle.  Small wound, a scratch really, but a teeth wound nonetheless and the possibility of rabies.

So finally I’m out of range and they head back home.  But what to do?

The rabies virus is no joke so I called 911.  Transferred to the Sheriff’s office.  The sheriff officer called me back and picked me up at the Wildhorse Cafe.  Then up the road to the scene.

I couldn’t have been more vindicated.  The officer drove into the driveway and seven (!) dogs came racing out.  Thumping into his car.  The officer could barely get out of that property with his squad car intact.  Crazy stuff.

He commented that he’s been on this road hundreds of times and has never seen them.  But while we were there, a pick-up going the other way stopped to say that he sees them every day.  Chasing cars.  And a laborer working on a construction project across the street told me that he’s been bitten and that they’re mucho problemo.

Back at the rig, I’m texting with animal control who wanted a picture.  As I said, it’s barely a scratch but here it is:

Animal control told me that all animals at the property are current on vaccinations but I’m skeptical.  I also asked about laws around animal attacks.  Was told that if a bite occurs, quarantine.  Public protection from dogs can be leveled against the owner if I press charges.  I’ve never done that before but I won’t sleep well if I don’t.  So that’s what I’m going to do.

It’s our last night in Pismo Beach and we’re going to miss it.

With sunset moving in, I went out for a walk on the beach and saw that a few dozen others had the same idea.  Beautiful scenery, beautiful weather.

We also visited Monarch Dunes Golf Club and liked what we saw.  Looks like we’ll be coming back 🙂

Sleep in.  Walk the dog on the beach.

Lunch at Monarch Dunes Golf Club.  Hit a bucket of balls.  Back for a slow afternoon and then dinner.

Still wowing over the failure of the American Health Care Act to even reach a vote in the House.  Washington is a crazy place these days.

Today was an easy one as we travelled a mere 73 mi from our Santa Barbara RV park to Pismo Coast Village RV Resort.

With the winter rain, California’s country side has exploded with flowers and the hill sides look more like Ireland that what we’re come to know.  And the vineyards are also beautiful even though dormant this time of year.

About about half way here, a Jeep towing a Bambi (a single axel Airstream) pulled in front of us so I though I’d follow for a while.  Wondering whether he was going to the same place.  So we trailed him and sure enough, he brought us right here.  Nice 🙂 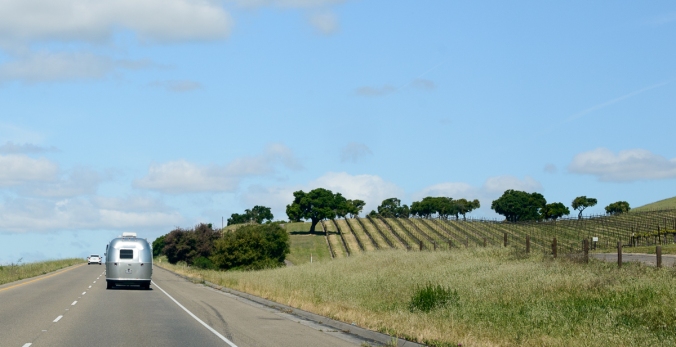 After settling in, TiVo and I headed to the beach.  A walk all of 50 yds.  Here’s our first view.  And a river separating us from the surf.  Looks like we’ll have to show that river who’s boss LOL 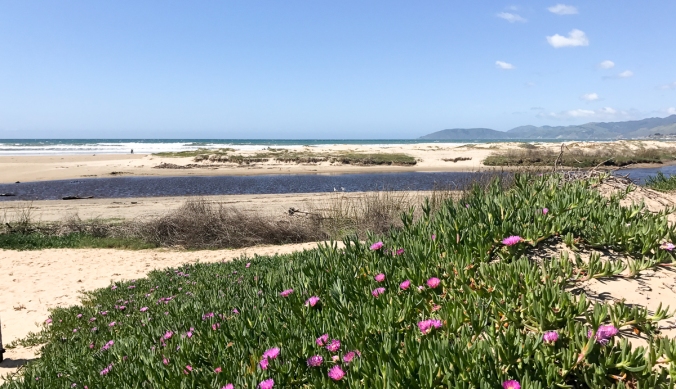 After three wonderful days in Malibu, we moved up the road to Ocean Mesa RV and Campground that is about 20 miles west of Santa Barbara.

Ocean Mesa is also adjacent to the El Capitan State Beach and about 3 miles from the Refugio State Beach.  This area is a beautiful stretch of the CA coast.

And then we were off to Santa Barbara for lunch on State Street.  Yes, it’s a tourist mecca but then again, we’re tourists.  I forgot to take a picture so I swiped this one from the web.

Google maps is great for checking out local running routes.  Turns out there’s a nice trail just around the corner.

It’s Solstice Canyon in the Santa Monica Mountains National Recreation Area.  The plan was to run up the canyon until the road ends.  Then onto a single track and connect to some roads that work their way back to our RV park.

Beautiful weather in the high 60’s with the marine layer just burning off.  Totally reminded me of running Mt Tam in Mill Valley 🙂

So up I went where I found the Keller House ruins.  Early residents that lost their house to a fire.  Then connect to a single track and try to find the adjoining road.

But just as I approached the road, there are ‘no trespassing’ signs.  Typical Malibu mentality.  Buy some coveted property with public access and then fence it off.

I wasn’t turning back so on I went.  Found the road and headed down.  Then more signs about private property and ‘right to pass by permission from owner’.

I eventually hit the main road and there’s a pile of mail.  Uh oh.  I’ve seen this before as we’ve been victimized by mail thieves.

So as I’m picking it up, half a dozen cars came by and no one’s gives a flip about it.  How can you drive by mail on the side of the road in your neighborhood and not be bothered?  Oh well, I called the Sheriff who sent someone up.  Hope the victim appreciates that he’s been informed that his mail was stolen.

Here’s the pile showing the junk mail.  But trust me, there’s a credit card envelope in their with the statement missing.  Someone better watch their accounts… 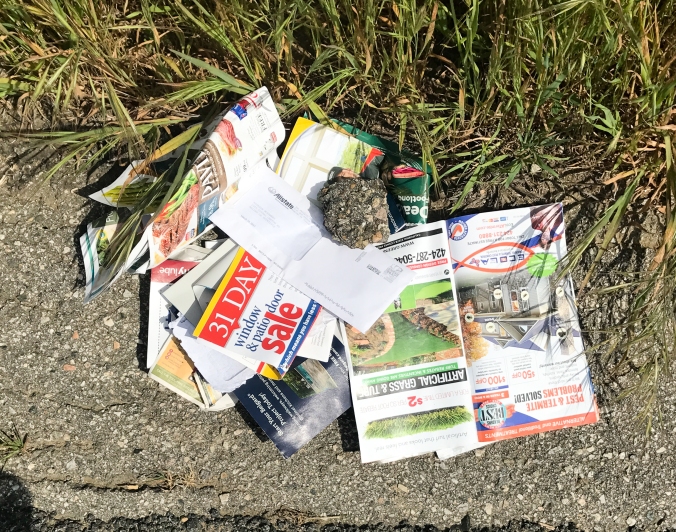 Yes, there really is such a thing.

Carol and I pulled into the Malibu Beach RV Park after fighting some nasty roads and nasty traffic in LA.  It was the usual suspects, i.e., the 5, the 405 and the 101.  In no other city are the highway numbers treated as nouns.  But here, they are.

This park is set on a bluff above PCH – that’s the Pacific Coast Highway – and has 5 rows of sites working their way up the bluff.  Not sure how it happened but we got a great spot in the front row 🙂

Here’s our site with a neighbor’s Airstream in the second row. 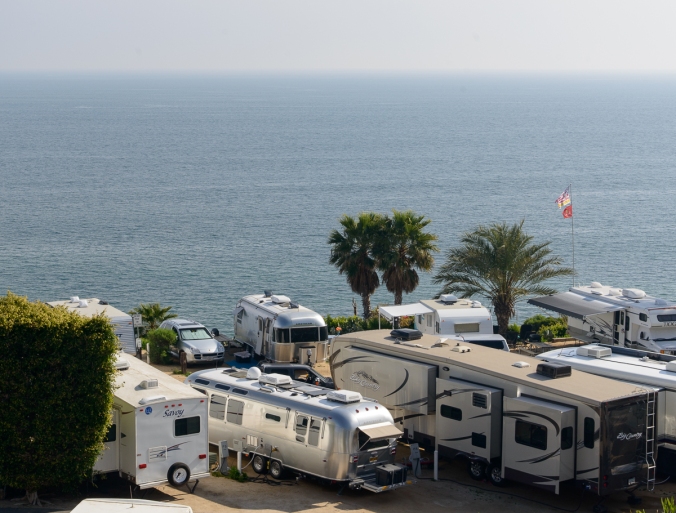 With bright sunshine, 72F outside and a light breeze, what more could you ask?

TiVo is our lovable Yorkie.  He’s also silver.  Never seen another one.  Until yesterday.

Carol and I were having lunch when a couple came in with their silver Yorkie. Cute little guy.  That’s him in the lower right next to our TiVo.

We bailed on Death Valley this morning.  Just too hot for camping without air conditioning.  Maybe when we were younger.  But not as retirees that know better 🙂

And no flowers 😩  Last year there was a Super Bloom and March set an all time attendance record.  So you can imagine how disappointed we were with no flowers this year.

So off we went to the west on Hwy 190.  Beautiful drive for me.  But not so much for Carol.  Her view of Death Valley is that ‘it’s ugly’ and ‘don’t go there’.  Too dry and desolate.

And then there’s the climb out of the valley.  Furnace Creek is 190 ft below sea level and the mountain pass is nearly 5,000 feet.  So it’s quite a hump.

The first part was easy as it was up and across the valley.  Here’s a typical view.

With lots of straight lines.  What could go wrong?

And then we started the climb.

Going up was slow but not too bad.  Very little traffic and the Cayenne did great although I would have liked more power.  Then down the back side with guard rails protecting killer drop-offs.  Carol wasn’t amused.

She suffers high anxiety under normal conditions so this was a doozy.  And she was riding in the back.

I don’t have shots of the tight turns as both hands were on the wheel.  But here’s one and if you look in the center, you can see the highway crossing the next valley.  And is that Mr Whitney, the tallest point in the continental US, on the horizon?

Then it was up and over the next range before we reached Hwy 395 and the Owens Valley.  Driving through stuff like this is fun for me but Carol couldn’t wait for it to end.  But end it did with this view of the Sierra on the approach to Hwy 395.