On March 27, 1964, the Good Friday Earthquake with a magnitude of 9.2 blasted Anchorage and the surrounding areas.  It lasted 4 min and 38 sec and was the most powerful earthquake ever recorded in North America.

The Alaska earthquake was a subduction zone earthquake (megathrust earthquake), caused by the Pacific plate sliding under the North American plate.  Land to the west of the fault line dropped 2-7 ft while land to the east was uplifted as much as 50 ft.  These are major movements.

But the real killers were the tsunamis.  The largest was recorded in Shoup Bay, Alaska, with a height of about 220 ft (yikes!) but there were others caused by underwater landslides.  Seward and Valdez, two port cities, were destroyed and Valdez moved inland four miles rather than rebuilding at the same location.  Tsunamis killed 124 of the 139 deaths.

Anchorage has an Earthquake Park located in the Turnagain Heights area overlooking the Cook Inlet.  During the earthquake, a mile and a half of bluff that was a quarter mile deep ruptured into large blocks and slid toward Cook Inlet.  This monument in the park depicts the slide. 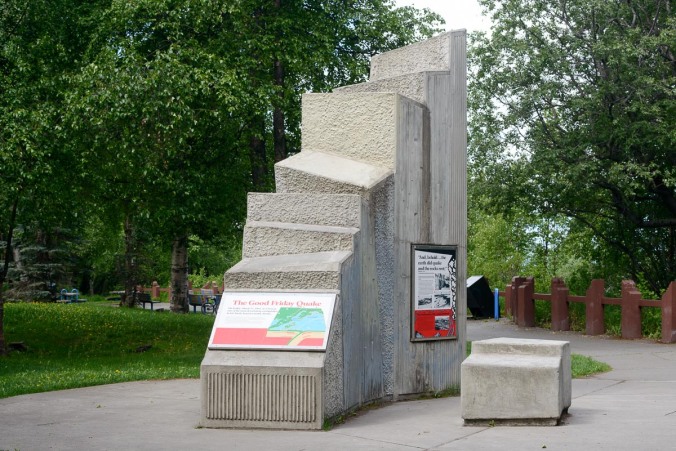 2 thoughts on “The Good Friday Earthquake”