The good news is that I was released from the hospital last night but the bad news is that I have seven fractures and the next fews months are going to be rough ones.  Here’s what happened.

We’re in the Emerald Desert RV Resort and our neighbors are a wonderful Canadian couple who’ve been down here the past few years.  They are also  friends with other Canadians and one thing they like to do is go four wheeling in the desert.  So when he extended an invitation to join them for a post Thanksgiving day ride, I was all in.

As in the past, the plan was to rent Honda quads from Steve’s ATV Rentals in Salton City nears the Salton Sea.  I joined most of the group in choosing a Honda 250 that weighs about 400 lbs.  I nice combo of power and weight.

Here’s part of the group as we are preparing to hit the trails.  The single seat Honda is on the left. 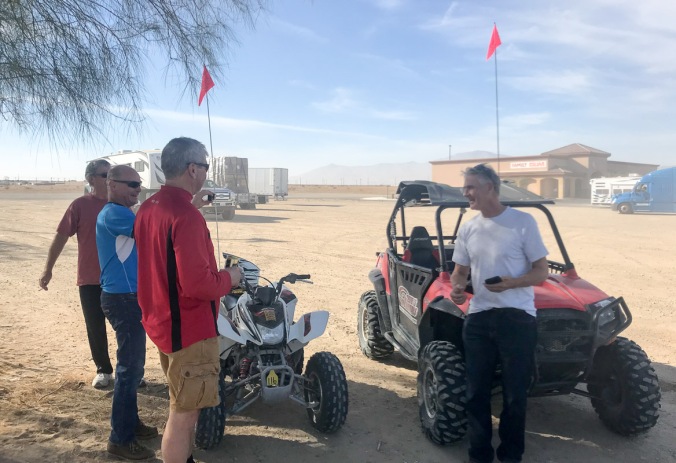 So off we went into the Ocotillow Wells State Vehicular Recreation Area for a four hour ride.

The area is full of dry washes with plenty of hills to climb.  Here’s my neighbor’s son climbing a small hill just as we were getting comfortable on the quads. 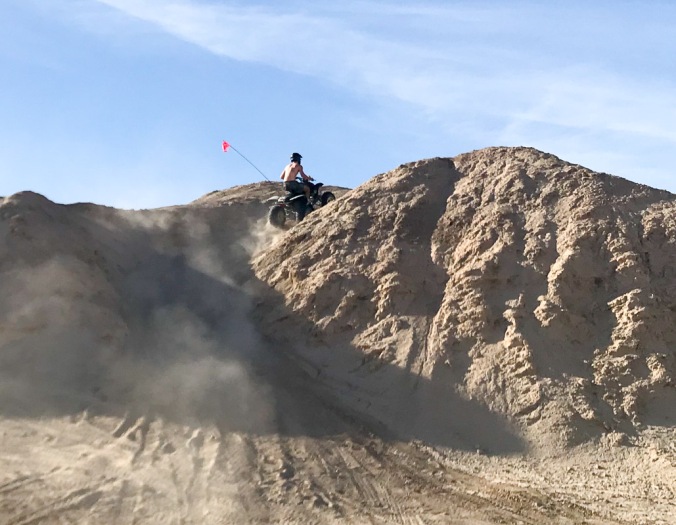 Later we were climbing hills many times higher looking for new challenges.  And that’s where I got into trouble.

We don’t have any pictures but I went up a steep one, lost traction near the top and started sliding backwards.  When the Honda got a little sideways, it pitched me off and tumbled right over me as we went down the hill.

The Honda caught my legs and pushed them into my chest and I heard three quick pops.  Uh oh, I thought, those are vertebrae.

When we came to rest, I was under the Honda but not pinned down.  My first reaction was to wiggle my toes and feet and thank goodness, they still worked.  (This is the second time I’ve been in this situation with a vertebrae fracture; back in ’83, I had a parachute accident and my first move, after coming to rest, was to wiggle my toes).

The accident knocked the wind out of me and it took a good ten minutes to get back to my feet.  But I was able to walk back to my Honda, with assistance, and fired it up.

By this time, it was late afternoon and time to head back.  For me, that meant a ~60 min ride at 5-8 mph depending on the terrain.  Every bump was a new experience in pain as my hips, lower back, right shoulder and chest were all sore.

When we got back to the truck, I was no longer able to stand under my own power and the guys put me in the back of the truck and took me to Eisenhower Medical Center in Palm Desert.  So chosen because it was the closest hospital to where we were staying.

I was admitted, went through triage and X-rays and learned that I had a few broken bones.  Since that hospital doesn’t have a trauma team, I was transferred to the Desert Regional Medical Center in Palm Springs.

Then once again through the admittance process, triage, X-rays, etc.  The attending ER doc told me that I have two fractures in my right pelvis, one on my right femur socket, one in my fourth rib on the right and three fractured vertebrae in the Lumbar (lower) section. I also have strained ligaments in the rotator cuff of my right shoulder.  Yikes, I thought it might be bad but not this bad 😦

All of the fractures are non-displaced and should heal on their own except L4.  That one suffered a ‘burst’ fracture and there’s a loose piece on the stomach side of the vertebrae (so away from my spinal cord).  The neurologists have determined that no surgery is needed for L4 so long as symptoms don’t develop, ie, numbness or twitching of the legs.  Fingers crossed.

The staff put me in the ICU late that night and I ended up four nights in the hospital.  I’ve got to tell you that it was absolutely no fun.  To protect my spinal cord, I was instructed to only sleep on my back.  That’s not the way I sleep so I was up basically all four nights.

And the pain!  Every time I would move, something hurt.  If it wasn’t my hip, then it was my rib.  If not that, then my shoulder.  Very ugly situation.

Since there was nothing more to do except let things heal, I wanted out.  It was a bit of a fight but I was released last night and am resting in our Airstream.

I have a lot of follow-up physical therapy to do and will be wearing a spinal brace for the next few months.  Here I am in the ICU with it newly attached. 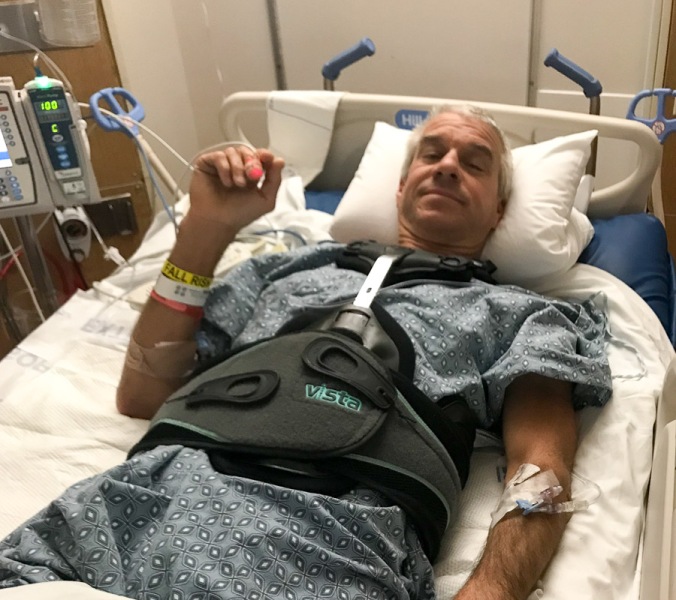 My right hip is sore and can’t bear my body’s weight so I am getting around on crutches.  Being mobile is nice but there’s pain every time I get up, move or try to sit down so a price to be paid.  My focus now is getting through the first few weeks, being weened off of the crutches and hopefully, getting to a point where the pain is manageable.

Long term I’m hoping for 100% recovery but I might not be so lucky this time.

Carol’s been an angel and I can’t say enough about how much I love her.

Thanks all and keep the rubber side down 🙂

For a runner, the beauty of the Bay Area are all of the hills and trails for running.  But not in Palm Desert.  Lots of flat, boring concrete.  Makes a run feel like work.  Yuck. 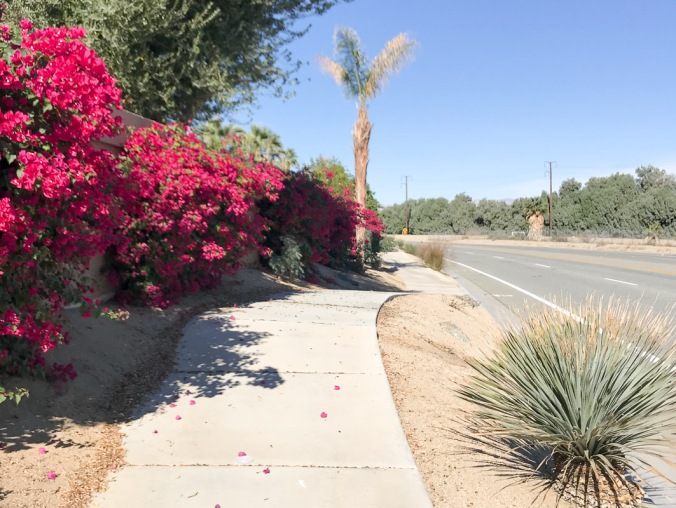 I went out for my first ride today and it’s easy to get around as the city is laid out with grid streets a mile apart.  And plenty of bike lanes.

And why not?  You have the golf cart community supporting their construction! 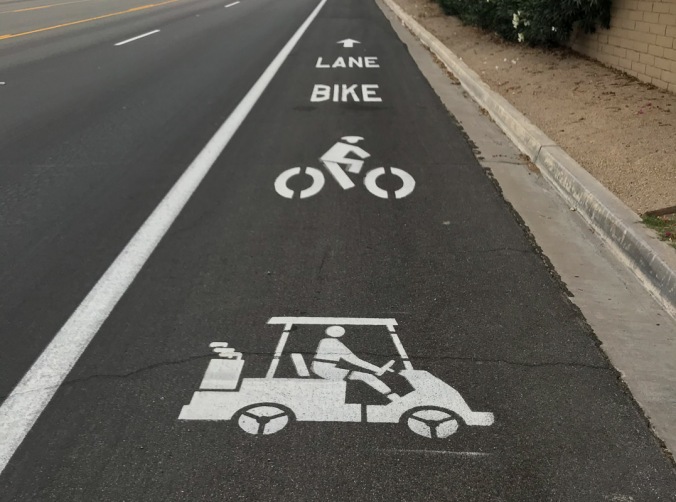 After our Trilogy visit, we headed south to Palm Desert in the Coachella Valley.  Other than a long weekend 20 yrs ago, we haven’t spent any time down here so thought the stop would be worth it.

The plan is to stay for 21 days at the Emerald Desert RV Resort before heading to Mesa, AZ to visit with my parents.

Emerald Desert is a high end park at >$100 per night but it’s really beautiful.  Unlike the Marin RV park that is a gravel parking lot, Emerald Desert is landscaped with lots of lush grass.  There are even two golf holes left from the days when they had a nine hole course.

Here’s the view from behind the green and that’s our Airstream center right.  This is probably the plushest site we’ve had over our 15 months of travel. 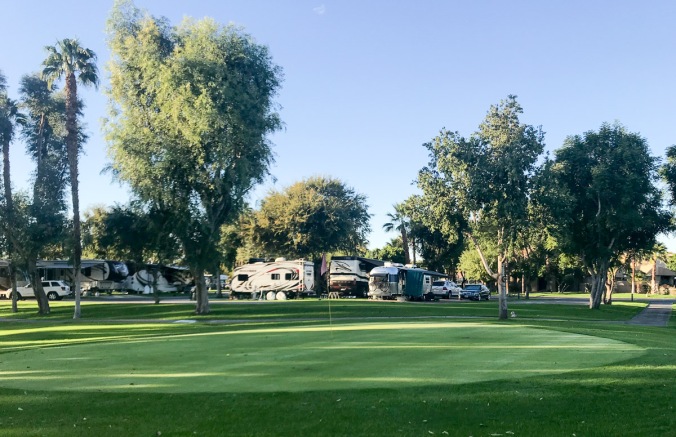 This brings up one of my pet peeves about Southern California:  What the f are they doing planting so much grass in the middle of an f’in desert?

After an wonderful ten weeks in Marin County, we packed up and started our journey south.  We’ve never been snowbirds (rain birds?) before but this will be our second winter in AZ.  We’re looking forward to it.

But first, we decided to spend a few days in the Central Coast area and another three weeks in the Palm Springs area before AZ.

Our itinerary was simple:  a night near San Juan Batista, another near Paso Robles and then two nights at Trilogy at Monach Dunes.  The latter is an active retirement community and we’re considering it for a potential retirement home.

Trilogy is a Shea Homes development and we’re well aware of the risks of planned communities.  But it has some of the key things we’re looking for:  cool year round weather (it’s only a few miles from the coast), golf, gym, restaurant, etc.

Trilogy hosted us in one of the model homes and we enjoyed a round of golf and dinner in their bistro.  The residents were really nice and we have no complaints except perhaps the dust that blows off of the sand dunes.  It was everywhere.

The development is 70% sold out and here’s the view from the model home.  Yes those are vineyard that they’re putting in.

Late on the evening of Oct 8, the winds kicked up in Wine Country knocking down trees and branches throughout the area.  Tragically, power lines were taken down and are the likely source of the fires that destroyed more than 7,500 structures and killed 43 people.

We were in Marin Park RV and woke up to the smell of smoke and ash falling out of the air.  Carol likes to leave her car windows cracked to prevent overheating.  Here’s what we found in the morning. 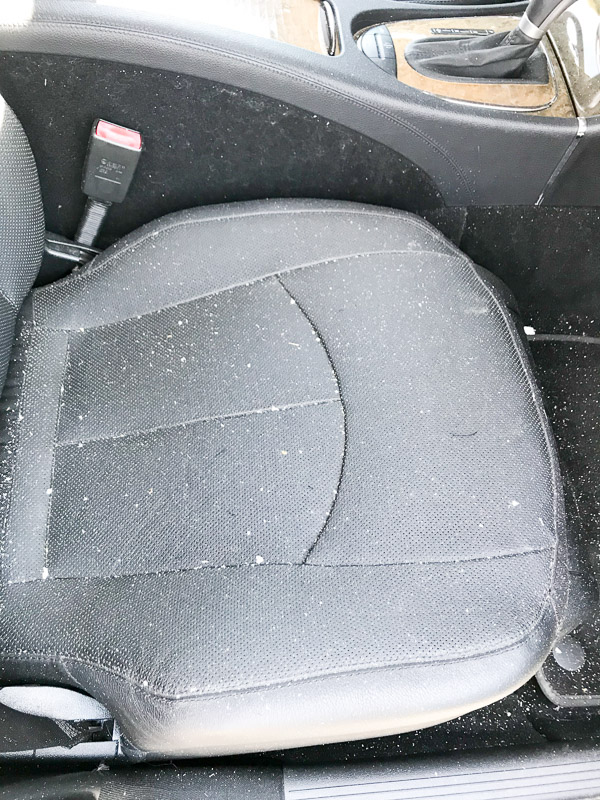 And the not so lovely smoke.