We booked the Suni Sands RV Park because it was near a Walmart, a muni golf course, easy access to the border town of Los Algodones and had great reviews on TripAdvisor.  What I didn’t know was that is was a time capsule.

Why?  Because the travel trailers, ie, mobile homes, were put here decades ago and haven’t changed a bit.  All nice and tidy and fully occupied by snowbirds, primarily Canadians.  And everyone is super nice 🙂 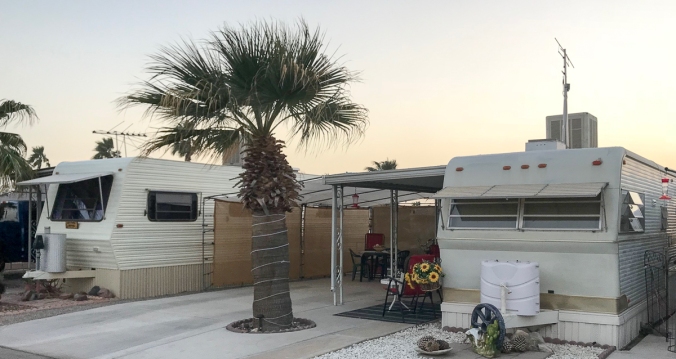 We moved into the Suni Sands RV Park in Yuma, AZ last night and it’s near the airport.  Little did we know that there’s an airshow this weekend.

We found out early this morning when an F-35 Joint Strike Fighter flew figure 8’s right over our heads.  And I mean he was right there.  I can’t believe how low they let them fly but I was loving it.

The F-35 is our most modern fighter and is a stealth aircraft.  Here’s a shot of the profile:

The F-35 has three variants.  One for the Air Force that’s designed for air superiority.  A second of the Navy that has air craft carrier landing capability and a third for the Marines.

There’s a Marine base here (in the desert??) so naturally they are flying that variant.  It is a STOVL aircraft, ie, designed for short takeoff and vertical landing.  Here’s she is coming in for a landing.  At this point, she’s going low and slow but went into a stationary hover a few minutes later.

Here’s a good shot of her belly where you can see that the main thruster is pointed down.  The plane also has a giant fan to keep it level during hovering.  You can see the intake in the photo above and the exhaust near the front of the fuselage.

And this is what you get when the thruster is pointed out the back: 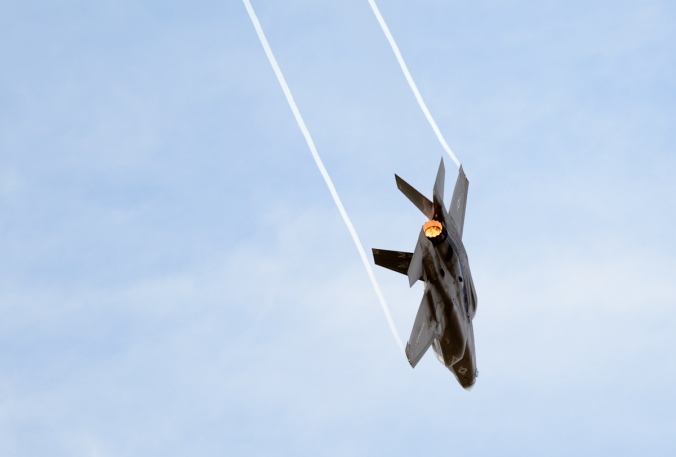 One last shot when the plane was banking straight over my head.  He’s flying horizontally with the left wing pointing straight down.  Funny perspective because it looks like he’s going straight up. 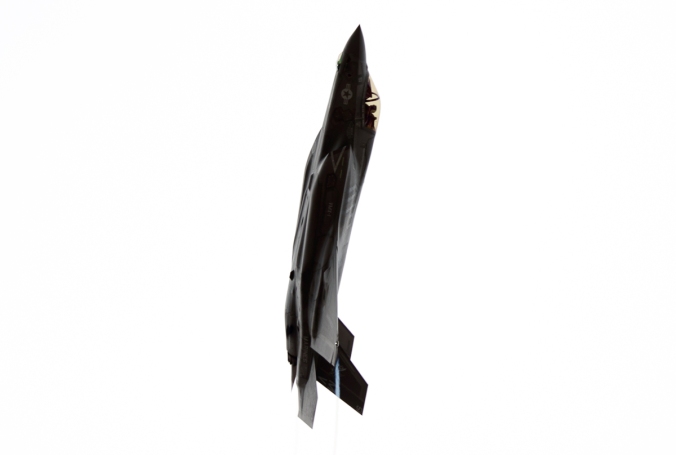 While strolling the NASCAR RV grounds at Phoenix International Raceway, I came upon this 1957 Airstream.

The owner said he bought it for $450 about 20 yrs ago and has been taking it to races ever since. 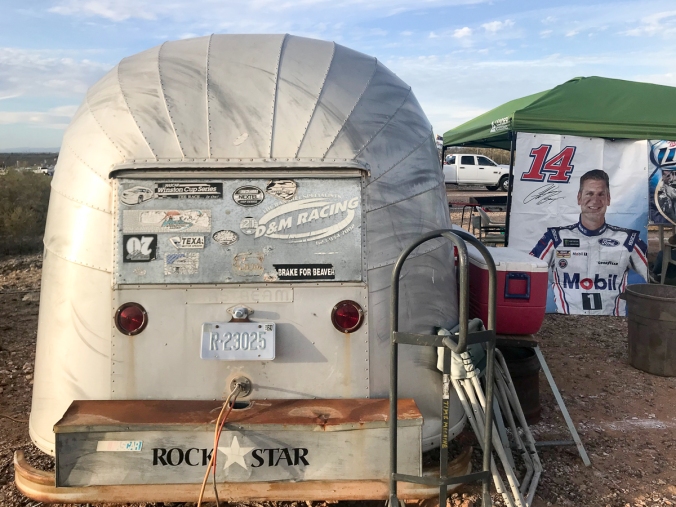 Not much to the interior as all he did was install a couple of beds and a shower.  Still pretty cool 🙂 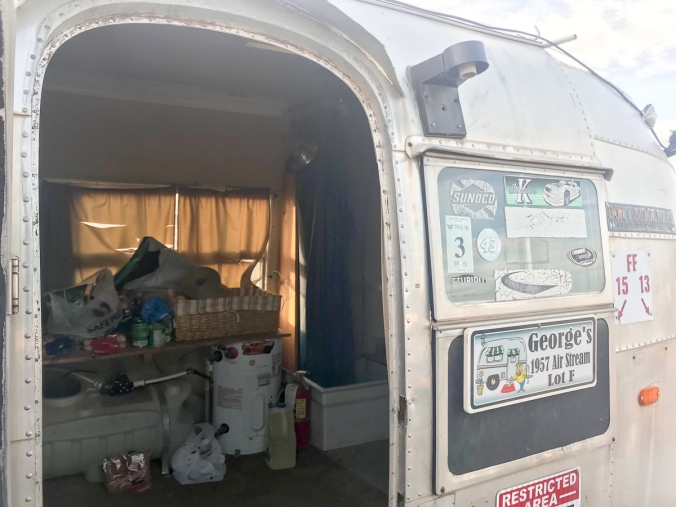 During our trip to Baja last year, we met a group of full timers who travel together to special events.  This weekend’s NASCAR race is one of those events.

I love cars and car racing but have never really been into the NASCAR scene and have never attended one of their races.  So this was a first for me.

We settled into our spot alongside the 86’ers and did what all NASCAR attendees do:  we opened a beer.  The first of many that weekend.

The RV grounds are laid out in the desert in one giant grid.  Here’s our street with our Airstream on the far left.  The grid went on for what seemed like miles. 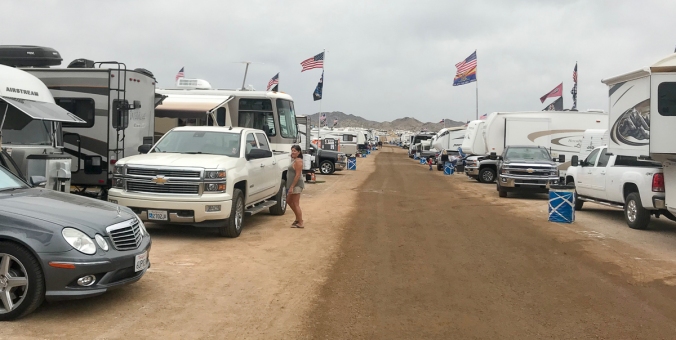 Cars are on track most of the weekend and are either tuning their cars, qualifying or racing.  Here’s the race on Sat that’s sorta like AAA baseball, ie, it’s one level below the top.  That’s a Camaro pace car with the field right behind. 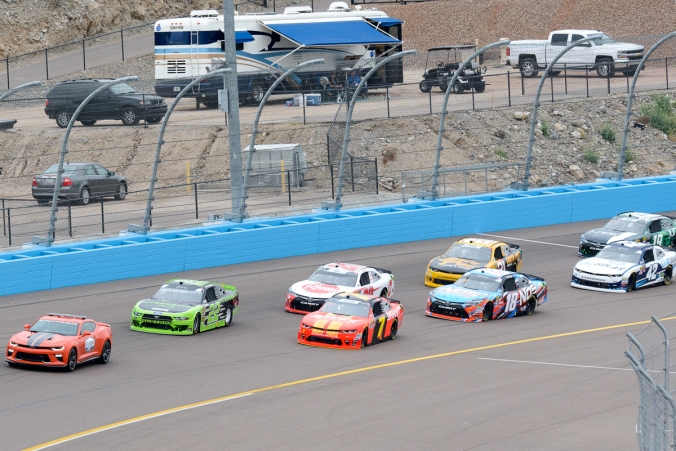 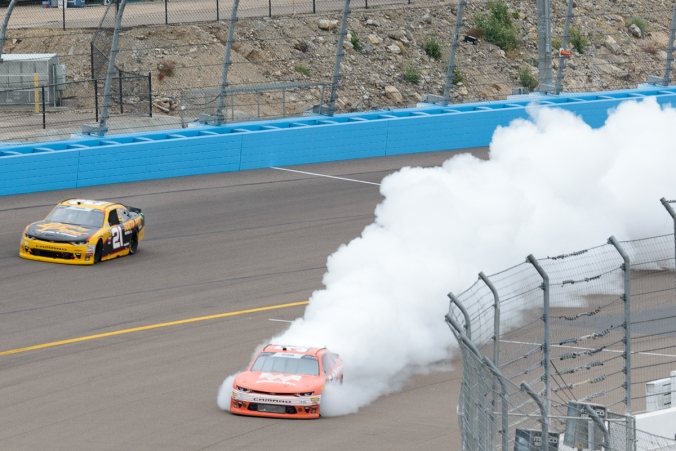 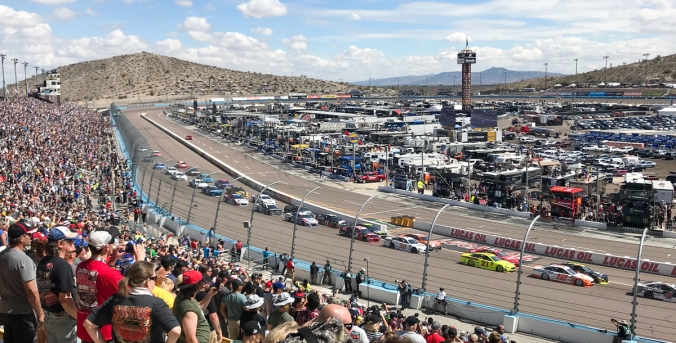 I’ve been offline the past couple of months because, well, there hasn’t been anything post worthy.  Carol and I have been relaxing in the Palm Creek RV Park and there’s been no adventure travel.  Just lots of R&R.

Last Fri marked 14 weeks since my ATV accident and I’m pretty much healed.  I no longer have pain from my fractures, ie, three vertebrae, two pelvis, one hip and one rib.

I still have some lower back pain but that’s probably because I’ve been beating too many golf balls on the driving range.  And my right shoulder will never be the same.  I don’t understand the physiology but the clavicle has been repositioned and isn’t going back.  So I have a bump that sticks up but it works so I’m grateful for that.

Palm Creek RV Park has been our home since Dec 26 but we’re leaving on Thur.  So tomorrow is a cleaning and organizing day.

On Thursday, we’re heading to NASCAR weekend at the Phoenix International Raceway and then we’ll spend three days with my parents in Mesa, AZ.  Then over the border at Yuma for a teeth cleaning and then a two week return to the Emerald Desert RV Park in Palm Desert.  Then back to Marin on April 1.  Yippee!